“The duty of the police is to maintain law and order with the smallest application of force consistent with the situation”. These words were spoken by Prof. Sig Kufferath in 1973 during a course he was teaching on Police Defensive Training. Tony Janovich, his assistant instructor, followed up by saying “This force should be reasonable for the circumstances”. The following was taken from material written by and or provided by Prof. Sig Kufferath.

When an officer is faced with a situation requiring the use of force… whether in a massive demonstration, or simply making a routine arrest, there is no more unpleasant a sight than to see the officer suffer needless injury or undue humiliation because he is unable to quickly and effectively control the suspect. Conversely, it is equally unpalatable to observe the unnecessary use of force on a subject when, with sufficient training, the officer could affect control with less force and effort… and less complaint from the observing public.

There is a spectrum of control ranging all the way from talking and reasoning with a suspect – through various hand and arm holds – to the baton, pepper spray or Taser, and finally if need be… the gun.

In dealing with a resistor, control is the key word. Control begins with the officer. One must learn first to control himself before he can control others. The manner in which an officer approaches a suspect – his speech, his demeanor, his ability to maintain an “inner calmness” – have a direct relation to the outcome. This inner calm, unfortunately, is not issued with each badge and gun, but can be a learned trait. Calmness, self control, confidence – are all a direct result of training and knowledge.

Police are trained to deal in facts. Let’s dwell a bit on a few facts regarding arrest control/defensive tactics training. Officers are often overheard to say something to the effect “I don’t need that self defense stuff, I’ve got all the self defense I need – 14 rounds on my hip.” In the old days it was 6 rounds. Let’s analyze that statement. An officer responds to a bar in answer to a disturbance call. Inside he is met by a belligerent drunk. Unable to talk him out of the bar, it becomes necessary to arrest him and remove him from the premises. The drunk refuses to go. He states, “If you want me outside, Cop, you will have to put me there,” and backs into a corner. Will the officer draw his “fourteen rounds of defense” and shoot the drunk? Obviously not. However, at this point, the importance of some type of arrest control training would be obvious.

Very few officers in the course of their careers ever have the occasion to shoot a suspect. This is a fact. Another fact, very few officers are successful 100% of the time in taking suspects into custody without a struggle where the use of force becomes necessary. Police Officers spend considerable time training in the use of firearms, and too often there is little or no time used in arrest control/defensive tactics training. This is unfortunate because too many officers are needlessly injured because they are unable to effectively cope with a resistor – and often by a female resistor.

One can never say he has trained enough in arrest control/defensive tactics, for there are others who have trained more. If you are interested in learning practical low-profile hand-to-hand defensive training, arrest control/defensive tactics, then Jujitsu is the answer. At this school we teach a special course in Police Defensive Training designed by Prof. Kufferath in the 1940’s and later updated by Profs. Kufferath and Janovich from the 1970’s and well into the 1990’s.  The course is taught in two sections: A and B. Each section is 40 hours in length. There is also the full course of Police Training and Instructor’s Training taught in three phases totaling over 500 hours. This course is reserved for active Police Officers who are Jujitsu students interested in becoming Police instructors. 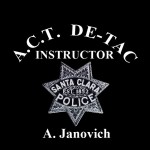 The arrest control/defensive tactics techniques taught in this course have all the outstanding and desirable features that other forms of officer arrest control/defensive tactics lack. They are quickly affected, unobtrusive in public situations and make it possible to avoid injury to anyone while affording the officer complete control and safety. The course also includes extensive training in effective baton techniques based on the Japanese wooden sword or Bokken. All techniques are designed to control the suspect, avoiding the use of unnecessary force.

The intensive courses would normally meet twice a week for 2 hours each session for 10 weeks. The full Police Course would require 3 classes a week at 3 hours each. Officers have come away from these courses with the confidence and assurance of being able to effectively use the techniques they learned on the street.

We also teach short courses on specific subjects such as baton, gun retention, ground work/grappling, and takedowns. Movement and learning how to fall and roll without injury is another short course we teach.

Police Instruction at the Kodenkan

The Police arrest control/defensive tactics can be taught here at the Kodenkan school or Prof. Janovich can come to your facility and teach over a period of several weeks. The intensive courses would normally meet twice a week for 2 hours each session for 10 weeks. Officers have come away from this course with the confidence and assurance of being able to effectively use the techniques they learned on the street. We also teach short courses on specific subjects such as baton, gun retention, grappling, and takedowns. Movement and learning how to fall and roll without injury is another short course we teach. The following are examples of training areas covered in the regular course: 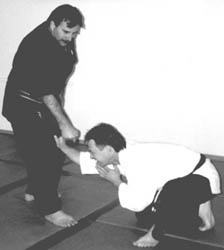 For the finest in Police Defensive Training contact Prof. Tony Janovich. Each 40 hour section is an intense course in practical Jujitsu for Police Officers. As a Law Enforcement Officer Prof. Janovich has thousands of hours of street experience and has used these Jujitsu techniques successfully. These police courses have been well received by all officers who have taken the lessons over the past 41 years. For some, taking the course has saved their lives or someone else’s. They have also avoided complaints for use of unnecessary force.

See a method to cuff a non-combative suspect.