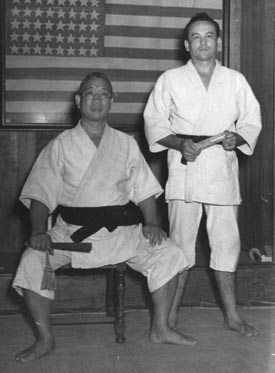 Prof. Sig Kufferath began his study of Jujitsu under Prof. Okazaki in 1937. He earned his black belt in 1941 and become an instructor in 1942. Under Okazaki he studied Chinese stick arts, Kiai, Karate Jitsu, Nerve arts, Shingen No Maki, and Shinyo No Maki and further studied Naihan No Shodan and Kumite.This was in addition to all the kata arts of Danzan-Ryu. He graduated Okazaki’s Nikko Restoration Sanatorium Seifuku Jitsu course in 1943. Prof. Okazaki made Kufferath chief instructor of his main dojo the Kodenkan in the late 1940’s. After Okazaki’s death in 1951 Kufferath was formerly elected by the board of directors of the AJI to succeed Okazaki as Professor of Danzan-Ryu Jujitsu. This became official October 6, 1953. He also held black belt rank in Aikido and Judo.

In 1957 Prof. Kufferath Left Hawaii and the American Jujitsu Institute for California, settling in Willow Glen area of San Jose. He continued his teaching of Jujitsu at Bill Montero’s dojo in San Jose. He moved to Santa Clara a year later. In 1960 he began teaching classes at the Los Altos Parks and Recreation Department.

In 1964 a student at Los Altos Recreation, Ed Dressen, opened a school where Kufferath became Chief Instructor. He has remained teaching in California since that time, going home at least once a year to visit Hawaii.

In 1973 Prof. Kufferath began teaching with his student, Tony Janovich, a black belt from Nikko Jujitsu School. Tony had recently organized his own class called Kodenkan Jujitsu School where Kufferath has taught to this day, presently located on El Camino in Santa Clara.  During those years at the Kodenkan, Prof. Kufferath and Janovich taught many courses, including 18 years of certification courses in Restoration Therapy, after they opened the courses to the general public.

They founded and taught the only “Kodenkan Jujitsu OkugiTM“, special black belt instructor classes, presenting “Kaidensho” to graduates, just as Prof. Okazaki did in 1948 , although Okazaki called it a “special class, not okugi“.  Now, Prof. Janovich is the only instructor authorized by Prof. Kufferath to be the “Kodenkan Jujitsu OkugiTM“ course instructor.  Profs. Kufferath and Janovich taught many  seminars on Jujitsu and Restoration Therapy around the country.

On May 7, 1999, Prof. Kufferath passed away at his home in Santa Clara, CA. A memorial service was held for him on May 15, 1999 and was attended by several hundred people, including family, friends, students and many high-ranking martial artists.